Arvest Art Gallery in Almaty is initiating the exhibition named “Life continues….” which is dedicated to one of the most horrifying pages in human history, that is 100th Anniversary of Armenian Genocide. The opening day is April 24 which is a national day of mourning, similarly, the time of opening at 19:15 is also symbolic as it represents the year when on the territory of Ottoman Empire according to various estimates 1.5m people were massacred.

The exhibition is devoted to one of the most appalling pages in human history, which cannot be remembered without shuddering. Very often these events are defined as The Great Crime.

The exposition focuses on two key directions: the past and the future and draws a dividing line between them with a chronological period lasting 100 years.

The deals of the past are presented in a documentary historical photo chronicle where the events are separated into “before” and “after”. We can see the peaceful flow of the life of Armenian families, honouring the traditions and preserving the customs, evenings accompanied by the music of the brass band. The photos which have survived witness to what great extent the people’s life was rich in cultural, social and educational aspects.

And all of a sudden these photos are continued into the horrifying scenes of deportation, violence and starvation of innocent people. The horror of the events was proved by the gruesome guess that the main aim was to destroy and demolish the whole nation, to wipe out the ethnos from the earth.

Many of the missioneries from other countries, witnessing the ongoing events led active civil policy to prevent the irreversible consequences of crimes against humanity.

At present the fact of Armenian Genocide has been acknowledged by many countries. The memorials and monuments standing in many parts of the world can serve as a proof of that acknowledgement. As a visitor of this exhibition you have a unique chance to observe some of the photos of those monuments and memorials.

The second part of the exhibition displays the present times. We can admire the beauty and the high level of development of modern Yerevan and appreciate the creations by Armenian artists. Armenian people survived irrespective of the circumstances, tenderly preserving the memory about the innocent victims. Modern national authors of Armenia address the observer speaking the language of art which is the main means of creations and composition. It is obvious that this energy is not compatible with destruction and extermination.

The musician and composer Komitas has become the most significant historical figure whose life and destiny have come to show the whole devastating scale of human tragedy.

Facing the atrocious extermination of the bright minds of the nation, which his sensitive mind was not able to withstand, the disconsolate ended up suffering from mental disorder.

During the years of his short creative activity he was able to show his highest skill by compiling a wonderful choir of 300 people, thus, bringing significant improvement to musical education. His merit served as a means to acknowledge him as the genius of Armenian music.

Within the frames of the exposition one more personal tragedy grasped by the artist Bella Asoyan is presented in the piece named “To the Memory of the Painter”. Bella Asoyan shows Arshil Gorky in her painting who being web-trapped in his own consciousness, consequently, paved the path to his untimely death.

Today, 100 years later, acknowledging that “Life continues….” is the high debt of contemporaries by preserving the memory of the greatest tragedy of the past. This needs to be done in order to exclude the possibility of recurrence. The forget-me-not on the chest is designed to become an appreciable sign of solidarity, a symbolic reminder of preserving the memory about the important international historical event.

Arvest Art Gallery being the organizer and the initiator of this memorial conceptual project has become the guide to the cultural life of Almaty, expressing the intention to save peace and unity not only in Armenian diaspora, but also among the multi-ethno population of Kazakhstan.

Edited and translated by Lusine Shahverdyan 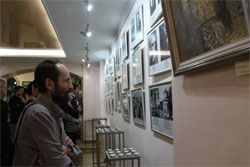 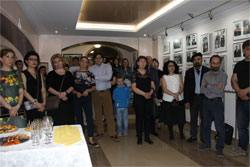 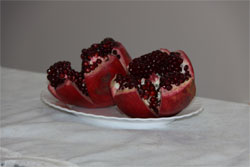