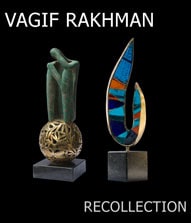 The shapes and symbols of Vagif Rakhmanov

Vagif Rakhmanov is a true master of forms – both monumental and subtle. They symbolise philosophy, religion, history, mythology and passion. In his work, the earth’s historic roots and the universe’s spiritual patterns, the dimensions of the east and the west are intertwined. The result is a canvas full of inverweaven lines, configurations and perspectives referring to these various themes.

The man we speak of is a sheer marvel, even to our century’s standards. Son of a jeweller, h was born into a well-off family. On his birth they gave him the name Vagif – meaning spring or start in Persian. He started his studies at the Baku Academy of Fine Arts and continued his studies at the Surikov Institute in Moscow. After having graduted, he returned to Kazakhstan, were during the second half of the XXth Century he became one of the so-called top-six sculptors. He joined the Artists’ Union and participated in exhibitions in the Republic, elsewhere in the Soviet Union and abroad. It all looked like a dream come true, culminating in the title of Honoured Art Personality, till all was abruptly disrupted. But his spirit’s flame did not die out, and he chose Canada as his new home and joined the Sculptor’s Association over there. It was then that he built up a new style, building up a harmonious blend between the Orient with its passion for sublimised grace on one hadn and the West with its experimental aspiration. His earlier works of that period express mainly diversity, but nowadays harmony and interaction are predominant. Thus, insight made him accumulate his visions and experience and develop them into a spiritual life which he visualises in his work.

Each time I pay Vagif a visit, I feel comfortable in his workshop in the back room of his home, only separated from the living room by a heavy curtain made of canvas. The workshop is like a sanctuary of creativity, while in the living room you can have a relaxed conversation over a cup of hot tea. Each and every item in his house, including the objects casually lying on the table, has its own history – and so to speak its own destiny. Once a conversation starts, a piece of wax stops being just a piece of wax and singles itself out from the other objects to become part of the artist’s very body and imagination. Once in Vagif’s hands, the piece of wax starts taking shape, and the beginning of a future bronze sculpture. I have discovered to my surprise how subordinate Vagif’s notion towards the material he works with is. The idea, the purpose and the end result of the work are of utmost importance to him. How the work is made is of minor importance in regard to what it expresses.

He could well be right, since material is just a silent vehicle, a means to give the work its shape and its sustainability, whereas shape itself and the idea behind it result in form and image. The sulptor is the master who creates form, leaving the spectator in awe on observing the stagnant silence with which the material undergoes the process. This feeling, however, is accompanied by an animist notion that the result of the process suggest that everything in the world has a soul. This makes one comprehend that the work of art empodies the artist’s mental strength. The subtle waves of spiritual energy that stretch beyond physical sensitivity into a virtual space featuring harmony and transparency, both crucial for the perception of visual arts.

However, it is not only dynamics that form the basis of Vagif’s creativity. The triad of form, symbol and experiment is embedded in a wide variety of ideas. These ideas come out in the open as a result of the artist’s mystical notion of the past and of the present. Moverover, the ideas take shape in the form of both symbolic and realistic images, which appeals to the eye but so to speak also to the ear. It is as though the images produce not just sound, but as though they actually speak to the spectator, And they continue to speak, in a stream of words in a voice from the void, alternating monotonous pitch with soft whispers telling about mysteries and secrets. At the same time, listening and watching drags the spectator away from the world. does not isolate the spectator from the world we live in, from his own personality and from the turmoil of everyday life. In the lives we live their is a similar yearning for experiment which is absorbed, so to speak, by art. This process results from our particular notion of the present and the past in combination with the history and development of art itself. This is why in the modern world the desire to experiment exists both in our daily lives and in fine arts.

Vagif also continues to experiment, and the results of his experiments over the last couple of years express his aspiration to push his creativity beyond the standard notion of a work of art being a static expression of fixed ideas. His works are dynamic in the sense that they breathe, and the air they breath comes from a virtual universe outside the limits of common perception. Their suggestivity resembles that of a stained glass window, an ice sculpture or a piece of jewelry.

It is no secret that in any work that speaks the truth there remain unrevealed riddles and features which cannot be perceived by the human mind because the human language has no words for them. This requires getting acuainted with symbols. They are part of Vagif’s very creative personality. They come from intuition, and are subject to a variety of associations and interpertations by means of complementary and confrontational combinations. The carachter of the symbolism in Vagif’s work is ambiguous, even multi-dimensional, and each spectator undergoes a different experience in observing and interpreting them, feeling ideas flowing into his mind at whatever level of abstraction. The spectator looks upon the symbol like into a mirror, which visualises the reverse of the original symbol created by the artist in his mind.

This is what makes Vagif’s art unique. Form, dynamics, shape and image are the essantial elements of the expressive strength of his work.

The opening of the exhibition 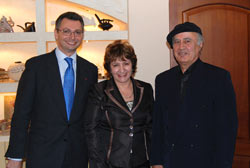 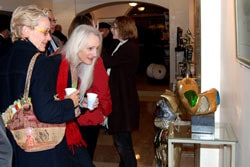 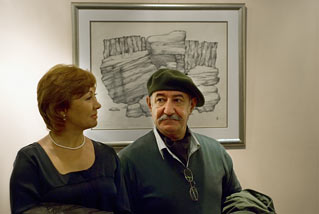 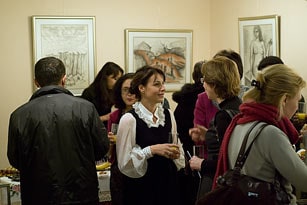 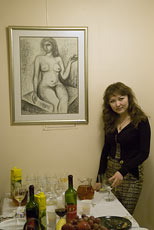 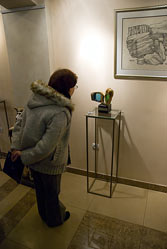 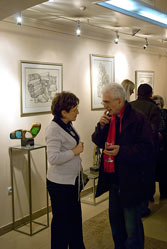